Walter Lang was an American film director. Born in Memphis, Tennessee, as a young man he went to New York City where he found clerical work at a film production company. The business piqued his artistic instincts and he began learning the various facets of filmmaking and eventually worked as an assistant director. However, Lang also had ambitions to be a painter and left the United States for a time to join the great gathering of artists and writers in the Montparnasse Quarter of Paris, France. Things did not work out as Lang hoped and he eventually returned home and to the film business.

In 1926, Walter Lang directed his first silent film, The Red Kimona. In the mid 1930s, he was hired by 20th Century Fox where, as a director, he "painted" a number of the spectacular colorful musicals for which Fox Studios became famous for producing during the 1940s. One of Lang's most recognized films is his 1956 epic The King and I for which he was nominated for the Academy Award for Directing.

Lang was married to Madalynne Field from 1937 until his death. Field, a former actress, had met and befriended Carole Lombard when they were employed as Mack Sennett "Bathing Beauties" in the late 1920s. Field's film career ended with the demise of Sennett's studio, however she maintained her friendship with Lombard, and acted as Lombard's secretary until her marriage. She met Lang when he directed Lombard in Love Before Breakfast. Walter Lang died in 1972 in Palm Springs, California and was interred in the Inglewood Park Cemetery in Inglewood, California. 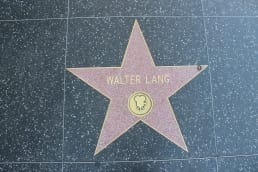