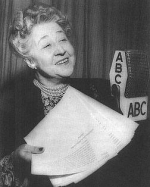 Verna Felton was an American character actress who was best-known for providing many female voices in numerous Disney animated films, as well as voicing Fred Flintstone’s mother-in-law Pearl Slaghoople for Hanna-Barbera. Her film appearances during the 1940s included If I Had My Way, Girls of the Big House and The Fuller Brush Man. She was much in demand as a movie character actress during the early 1950s, including Belles on Their Toes and Don’t Bother to Knock and her memorable supporting role of Mrs. Potts in the film of William Inge’s Picnic. She also worked extensively in radio, notably playing Junior the Mean Widdle Kid’s grandmother on Red Skelton’s radio series and Dennis Day’s mother on The Jack Benny Program. In addition, she performed on radio as a regular on The Abbott and Costello Show. Felton was married to radio actor Lee Millar, who also did animation voices (notably for Disney’s Pluto, and their son, Lee Carson Millar Jr., appeared as an actor on a variety of TV shows between 1952 and 1967.

Her guest appearances on I Love Lucy led to a regular supporting role as Hilda Crocker on the CBS sitcom December Bride, with Spring Byington, Dean Miller, Frances Rafferty and Harry Morgan. She continued her Hilda Crocker role on the December Bride spin-off, Pete and Gladys, starring Harry Morgan and Cara Williams. She was also the original voice of Pearl Slaghoople, voicing the character as a semi-regular on The Flintstones from 1960 to 1964.

Felton was a popular actress at the Walt Disney Studios and MGM Studios, lending her voice to several animated features, including: