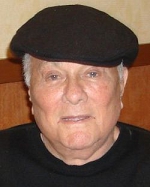 Tony Curtis is an American film actor. He has played a variety of roles, from light comedy, such as the musician on the run from gangsters in Some Like It Hot, to serious dramatic roles, such as an escaped convict in The Defiant Ones, which earned him a nomination for the Academy Award for Best Actor. Since 1949, he has appeared in more than 100 films and has made frequent television appearances.

Curtis was born Bernard Schwartz in the Bronx, New York, the son of Emanuel Schwartz and his wife Helen Klein. His parents were Hungarian immigrants of Jewish descent from Mátészalka, Hungary; Hungarian was Curtis’ only language until he was five or six, postponing his schooling. His father was a tailor and the family lived in the back of the shop&mdash;the parents in one corner and Curtis and his brothers Julius and Robert in another. His mother had once made an appearance as a participant on the television show You Bet Your Life, hosted by Groucho Marx. Curtis has said, “When I was a child Mom beat me up and was very aggressive and antagonistic.” His mother was later diagnosed with schizophrenia, a mental illness which also affected his brother Robert and led to his institutionalization. When Curtis was eight, he and his younger brother Julius were placed in an orphanage for a month because their parents could not afford to feed them. Four years later, Julius was struck and killed by a truck.

During World War II, Curtis joined the United States Navy due to watching Cary Grant in Destination Tokyo and Tyrone Power in Crash Dive. He served aboard USS Proteus, a submarine tender, and on September 2, 1945, he witnessed the Japanese surrender in Tokyo Bay from about a mile away. Following his discharge, Curtis studied acting at the Dramatic Workshop of The New School in New York with the influential German stage director Erwin Piscator, along with Elaine Stritch, Walter Matthau, and Rod Steiger. He was discovered by a talent agent and casting director Joyce Selznick. Curtis claims it was because he “was the handsomest of the boys.” Arriving in Hollywood in 1948 at age 23, he was placed under contract at Universal Pictures and changed his name to Tony Curtis, taking his first name from the novel Anthony Adverse and his last name from “Kurtz”, a surname from his mother’s family. Although the studio taught him fencing and riding, Curtis admits he was at first only interested in girls and money.

Curtis’s uncredited screen debut came in Criss Cross playing a rumba dancer. Later, he cemented his reputation with breakthrough performances such as in the role of the scheming press agent Sidney Falco in Sweet Smell of Success with Burt Lancaster and an Oscar-nominated performance as a bigoted escaped convict chained to Sidney Poitier in The Defiant Ones. He did both screen comedy and drama together and became the most sought after star in Hollywood: Curtis’ comedies include Some Like It Hot and Sex and the Single Girl, and his dramas include The Outsider, the true story of WW II veteran Ira Hayes, and The Boston Strangler, in which he played the self-confessed murderer of the film’s title, Albert DeSalvo. The latter film was praised for Curtis’ performance.