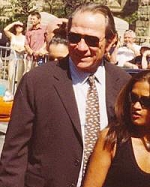 Tommy Lee Jones is an American actor and director.

His film roles include federal marshal Samuel Gerard in The Fugitive and U.S. Marshals, the villain “Two-Face” in Batman Forever, terrorist William Strannix in Under Siege, Agent K in the Men in Black films, Western police officers Woodrow F. Call in Lonesome Dove, Ed Tom Bell in No Country for Old Men, a Texas ranger in Man of the House and Pete Perkins in The Three Burials of Melquiades Estrada. Jones has also portrayed real-life figures such as businessman Howard Hughes, executed murderer Gary Gilmore, Doolittle Lynn in Coal Miner’s Daughter and baseball great Ty Cobb.

Jones was born in San Saba, Texas, the son of Lucille Marie, a police officer, school teacher, and beauty shop owner, and Clyde C. Jones, an oil field worker; the two were married and divorced twice. Jones, an eighth-generation Texan, had a Cherokee grandparent. He was a resident of Midland, Texas and attended Robert E. Lee High School.

Jones graduated from the St. Mark’s School of Texas, where he attended on scholarship and is now on the board of directors, and attended Harvard College on a need-based scholarship, staying in Mower B-12 as a freshman, across the hall from future Vice President Al Gore. As an upperclassman, he was roommates with Gore and Bob Somerby, who later became editor of the media criticism site the Daily Howler. Jones played offensive tackle on Harvard’s undefeated 1968 varsity football team, was nominated as a first-team All-Ivy League selection, and played in the memorable and literal last-minute Harvard sixteen-point comeback to tie Yale in the 1968 Game. Jones graduated cum laude with a Bachelor of Arts in English in 1969.