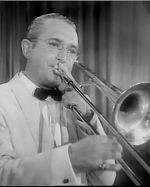 Thomas Francis Dorsey was an American jazz trombonist, trumpeter, composer, and bandleader of the Big Band era. He was known as “The Sentimental Gentleman of Swing”, due to his smooth-toned trombone playing. He was the younger brother of bandleader Jimmy Dorsey. After Dorsey broke with his brother in the mid thirties, he led an extremely popular band from the late thirties into the nineteen fifties. Dorsey had a reputation for being a perfectionist. He was volatile and also known to hire and fire musicians based on his mood.

Thomas Francis Dorsey, Jr. was a native of Shenandoah, Pennsylvania, the second of four children born to Thomas Francis Dorsey, Sr. and Theresa Dorsey. The Dorsey brothers’ two younger siblings were Mary and Edward. At age 15, Jimmy Dorsey recommended his brother Tommy as the replacement for Russ Morgan in the germane 1920s territory band “The Scranton Sirens.” Tommy and Jimmy worked in several bands, including those of Tal Henry, Rudy Vallee, Vincent Lopez, Nathaniel Shilkret, and especially Paul Whiteman. In 1928, the Dorsey Brothers had their first hit with “Coquette” for OKeh records. The Dorsey Brothers band signed with Decca records in 1934, having a hit with “I Believe In Miracles”. Future bandleader Glenn Miller was a member of the Dorsey Brothers Orchestra in 1934 and 1935, composing “Annie’s Cousin Fanny” and “Dese Dem Dose” both recorded for Decca for the band. Ongoing acrimony between the brothers, however, led to Tommy Dorsey’s walking out to form his own band in 1935, just as the orchestra was having a hit with “Every Little Moment.”

Tommy Dorsey’s first band was formed out of the remains of the Joe Haymes band. The new band was popular from almost the moment it signed with RCA Victor with “On Treasure Island”, the first of four hits for the new band in 1935. The Dorsey band had a national radio presence in 1936 first from Dallas and then from Los Angeles. Tommy Dorsey and his Orchestra took over comedian Jack Pearl’s radio show in 1937.