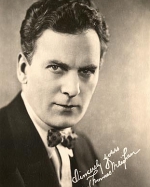 Thomas Meighan was an American actor of silent films and early talkies. He played several leading man roles opposite popular actresses of the day including Mary Pickford and Gloria Swanson. At one point he commanded $10,000 a week.

Meighan was born to John and Mary Meighan in Pittsburgh, Pennsylvania. His father was the president of Pittsburgh Facing Mills and his family was well off.

Meighan’s parents encouraged him to go to college but he refused. At the age of 15 his father sent him to work shoveling coal which quickly changed his mind. He attended St. Mary’s College studying pharmacology. After 3 years of study Meighan decided he wished to pursue acting.

After dropping out of college in 1896 Meighan became a juvenile player in the Pittsburgh Stock Company headed by Henriette Crosman. He was paid $35 a week.