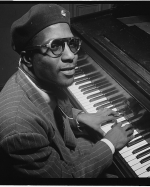 Thelonious Sphere Monk was an American jazz pianist and composer considered “one of the giants of American music”. Monk had a unique improvisational style and made numerous contributions to the standard jazz repertoire, including “Epistrophy”, “‘Round Midnight”, “Blue Monk”, “Straight, No Chaser” and “Well, You Needn’t”. Monk is the second most recorded jazz composer after Duke Ellington, which is particularly remarkable as Ellington composed over 1,000 songs while Monk wrote about 70.

Often regarded as a founder of bebop, Monk’s playing later evolved away from that style. His compositions and improvisations are full of dissonant harmonies and angular melodic twists, and are consistent with Monk’s unorthodox approach to the piano, which combined a highly percussive attack with abrupt, dramatic use of silences and hesitations.

Monk’s manner was idiosyncratic. Visually, he was renowned for his distinctive style in suits, hats and sunglasses. He was also noted for the fact that at times, while the other musicians in the band continued playing, he would stop, stand up from the keyboard and dance for a few moments before returning to the piano. One of his regular dances consisted of continuously turning counterclockwise, which has drawn comparisons to ring-shout and Sufi whirling.

He is one of only five jazz musicians to be featured on the cover of Time .