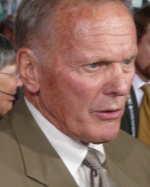 Tab Hunter is an American actor, singer, former teen idol and author who has starred in over forty major films.

Hunter was born to German immigrants Charles Kelm and Gertrude Gelien. Hunter's father was an abusive man and within a few years of his birth, his parents divorced and his mother moved with her two sons to California. She reassumed her maiden surname Gelien and changed her sons' name to that as well. As a teenager Hunter was a figure skater, competing in both singles and pairs, and a horseback rider.

In later years Hunter's mother was institutionalized and underwent shock treatments, and he supported her financially until her death.

Arthur Gelien was christened 'Tab Hunter' by his first agent, Henry Willson. His good looks landed him a role in the film Island of Desire opposite Linda Darnell. However, it was his co-starring role as young Marine Danny in 1955's World War II drama Battle Cry, in which he has an affair with an older woman, but ends up marrying the girl next door, that cemented his position as one of Hollywood's top young romantic leads. He went on to star in over forty films.