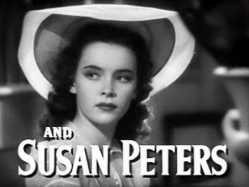 Susan Peters was an American actress. Peters was born Suzanne Carnahan in Spokane, Washington. First contracted by Warner Brothers, she subsequently began working for MGM Studios after completing high school. Her first job was to read with potential actors in their screen tests. Before long she had impressed studio executives with her own talent, and they began casting her in films.

For the first two years she used her given name and played small, often uncredited parts in films such as Meet John Doe before adopting her stage name. But her beguiling acting in a supporting role in the MGM programmer Tish resulted in a studio contract. Her first substantial role, in Random Harvest, earned her an Academy Award for Best Supporting Actress nomination.

Further impressed, MGM began to groom her for starring roles, casting her in several lesser productions that allowed her to learn her craft. A starring role in Song of Russia

earned her critical acclaim, but the film was not a commercial success. However, in 1944 she was one of ten actors who were elevated from “featured player” status to the studio’s official “star” category; the others included Esther Williams, Laraine Day, Kathryn Grayson, Van Johnson, Margaret O’Brien, Ginny Simms, Robert Walker, Gene Kelly, and George Murphy. An official portrait taken of MGM’s contracted players during this period prominently features Peters sharing the front row with the head of the studio himself, Louis B. Mayer, and alongside such illustrious actors as James Stewart, Mickey Rooney, Margaret Sullavan, Katharine Hepburn, Hedy Lamarr, and Greer Garson.