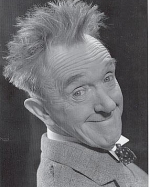 Arthur Stanley Jefferson, better known as Stan Laurel, was an English comic actor, writer and film director, famous as the first half of the comedy double-act Laurel and Hardy. His career stretched from the silent films of the early 20th century until after World War II.

Stan Laurel was born in his grandparents’ house on 16 June 1890 at 3 Argyle Street, Ulverston in the Furness region of Lancashire, England. His parents, Arthur and Madge Jefferson, were both active in the theatre and always very busy. But Stan’s home life in Bishop Auckland, County Durham was still a happy one. In his early years, he spent much time living with his grandmother Sarah Metcalfe. He attended school at the King James I Grammar School, Bishop Auckland and The King’s School, Tynemouth, for a while he attended Rutherglen Academy. His father managed a number of different theatres ? one of which being the long demolished Eden Theatre in Bishop Auckland. Stan had a natural affinity for the theatre, with his first professional performance on stage being at the Britannia Panopticon in Glasgow, Scotland, at the age of 16.

In 1910, he joined Fred Karno’s troupe of actors, which also included a young Charlie Chaplin. For some time, Stan acted as Chaplin’s understudy. The Karno troupe toured America, and brought both Chaplin and Laurel to the United States for the first time. From 1916 to 1918, he teamed up with Alice and Baldwin Cooke, who became lifelong friends. Amongst other performers, Laurel worked briefly alongside Oliver Hardy in a silent film short The Lucky Dog. This was before the two became a team.