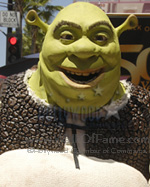 Shrek was honored with the 2,408th star on the Hollywood Walk of Fame. Leron Gubler, President and CEO of the Hollywood Chamber of Commerce, presided over the ceremony. Accepting the star alongside Shrek was actor Mike Myers. Guests included Antonio Banderas and Jeffrey Katzenberg.

An Academy Award® winner for the first ever awarded Best Animated Feature Oscar, "Shrek," became a phenomenon upon its release in 2001, and introduced audience all over the world to Mike Myers as the beloved ogre Shrek, along with Cameron Diaz as Princess Fiona and Eddie Murphy as Donkey. Its sequel, which introduced audiences to Antonio Banderas as Puss-in-Boots, broke records in 2004 becoming the highest grossing animated film of all time. "Shrek The Third," featuring Justin Timberlake, Julie Andrews and John Cleese, ranks as the 6th biggest opening of all time, earning nearly $800 million worldwide. Combined, the Shrek franchise has brought in an unprecedented $2.2 billion in movie ticket sales globally.

The much anticipated fourth and final chapter of "Shrek," was released nationwide in May 2010 by DreamWorks Animation, distributed by Paramount Pictures. Joining Myers, Diaz, Murphy, and Banderas for the final chapter is director Mike Mitchell and the voices of Jon Hamm, Jane Lynch, Craig Robinson, and Ryan Seacrest.

An ambassador for several charitable causes, the big green ogre has lent his name to several non-profit initiatives in the last decade, including:

* In celebration of the first movie in May 2001, Shrek and DreamWorks Animation partnered with First Book, who provides new free books to children from low income families. The campaign was a great success, with three million books given away.

*In January 2003, Shrek and his friends at Variety hosted the Gold Heart pins program, to help special needs children in the Greater Kansas City area.

*Multiple "Shrek 2" premieres were held in the UK to support the "Make It Big" program on behalf of the National Autistic Society.