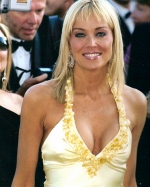 Stone was born in Meadville, Pennsylvania. The second of four children, she is the daughter of Dorothy, an accountant and homemaker, and Joseph Stone, a tool and die manufacturer. Stone graduated in 1975 from Saegertown High School in Saegertown, Pennsylvania, graduating early in an accelerated study program in conjunction with Edinboro University of Pennsylvania. After graduating from high school, she briefly attended Edinboro.

As a teenager, she worked at a fast food restaurant.

Stone won the title of Miss Crawford County in Meadville. One of the pageant judges said she should quit school and move to New York City to become a fashion model. When her mother heard this, she agreed, and, in 1977 Stone left Meadville, moving in with an aunt in New Jersey. Within four days of her arrival in New Jersey, she was signed by Ford Modeling Agency in New York.