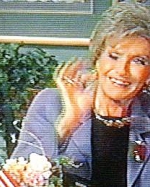 Dame Ruth Elizabeth Warrick, DM, OSJ, Regent of Cathedral of St. John the Divine, Dame of Honour and Merit by the Imperial Russian Order of Saint John of Jerusalem Ecumenical Foundation, was an American singer, actress and activist, best known for her role as Phoebe Tyler on All My Children.

She celebrated her 80th birthday by attending a special screening of Citizen Kane to a packed, standing-room-only audience, to which she spoke afterward. Over the years, she collected several books about Orson Welles and Citizen Kane, in which she would write “Property of Ruth Warrick, Mrs. Citizen Kane”.

She was born in Saint Joseph, Missouri. By writing an essay in high school called “Prevention and Cure of Tuberculosis”, Warrick won a contest to be Miss Jubilesta, Missouri’s paid ambassador to New York City. Popular legend says that she made her debut in New York City on the steps of city hall with an armful of turkeys for Mayor Fiorello La Guardia.