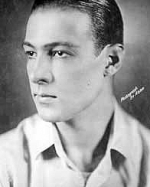 Rudolph Valentino was an Italian actor, sex symbol, and early pop icon. Known as the “Latin Lover”, he was one of the most popular international stars of the 1920s, and one of the most recognized stars of the silent film era. He is best known for his work in The Sheik and The Four Horsemen of the Apocalypse. His death at age 31 caused mass hysteria among his female fans, propelling him into icon status.

Valentino was born Rodolfo Alfonso Raffaello Piero Filiberto Guglielmi in Castellaneta, Puglia, Kingdom of Italy, to a French mother, Marie Berthe Gabrielle Barbin, and Giovanni Antonio Giuseppe Fedele Guglielmi, a veterinarian who died of malaria, then widespread in Southern Italy, when Valentino was 11. He had an older brother, Alberto, a younger sister, Maria, and an older sister Beatrice who died in infancy.

As a child, Valentino was reportedly spoiled and troublesome. His mother coddled him while his father disapproved of his behavior. He did poorly in school, and was eventually enrolled in agricultural school where he received a degree.

After living in Paris in 1912, he soon returned to Italy. Unable to secure employment, he departed for the United States in 1913. He was processed at Ellis Island at age 18 on December 23, 1913.