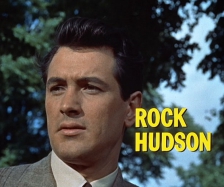 Roy Harold Scherer, Jr., known professionally as Rock Hudson, was an American film and television actor, recognized as a romantic leading man during the 1950s and 1960s, most notably in several romantic comedies with his most famous co-star, Doris Day. Hudson was voted “Star of the Year”, “Favorite Leading Man”, and similar titles by numerous movie magazines. The tall actor was unquestionably one of the most popular and well-known movie stars of the time. He completed nearly 70 motion pictures and starred in several television productions during a career that spanned over four decades. Hudson was also one of the first major Hollywood celebrities to die from an AIDS-related illness.

Hudson was born Roy Harold Scherer, Jr., in Winnetka, Illinois, the only child of Katherine Wood, a telephone operator, and Roy Harold Scherer, Sr., an auto mechanic who abandoned the family during the depths of the Great Depression. His mother remarried and his stepfather Wallace “Wally” Fitzgerald adopted him, changing his last name to Fitzgerald. Hudson’s years at New Trier High School were unremarkable. He sang in the school’s glee club and was remembered as a shy boy who delivered newspapers, ran errands and worked as a golf caddy.

After graduating from high school, he served in the Philippines as an aircraft mechanic for the United States Navy during World War II. In 1946, Hudson moved to the Los Angeles area to pursue an acting career and applied to the University of Southern California’s dramatics program, but he was rejected owing to poor grades. Hudson worked for a time as a truck driver, longing to be an actor but with no success in breaking into the movies. A fortunate meeting with Hollywood talent scout Henry Willson in 1948 got Hudson his start in the business.

Hudson made his debut with a small part in the 1948 Warner Bros.’ Fighter Squadron. Hudson needed no fewer than 38 takes before successfully delivering his only line in the film.