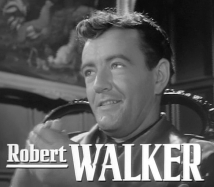 Robert Hudson Walker was an American actor. Born in Salt Lake City, Utah, to Zella and Horace Walker, he was the youngest of four sons. Emotionally scarred by his parents’ divorce when he was still a child, he subsequently developed an interest in acting which led to his maternal aunt Hortense Odlum to offer to pay for his enrollment at the American Academy of Dramatic Arts in New York City in 1937. Walker lived in her home during his first year in the city.

While attending the AADA, Walker met fellow aspiring actress Phylis Isley, who later became the film star Jennifer Jones. After a brief courtship, the couple were married in Tulsa, Oklahoma on January 2, 1939 and moved to Hollywood to find work in films but their prospects proved to be meager and they soon returned to New York. Walker soon found work in radio while Phylis stayed home and gave birth to two sons in quick succession, actor Robert Walker, Jr., born April 15, 1940, and Michael Walker, born March 13, 1941. Phylis then returned to auditioning where her luck changed when she was discovered in 1941 by producer David O. Selznick, who changed her name to Jennifer Jones and groomed her for stardom. During their initial meetings Selznick was highly attracted to Jones and they quietly began an affair. She eventually landed the plum role of Bernadette Soubirous in the Twentieth Century Fox production The Song of Bernadette. The couple returned to Hollywood, and Selznick’s connections helped Walker secure a contract with Metro-Goldwyn-Mayer, where he started work on the war drama Bataan. Walker’s charming demeanor and boyish good looks caught on with audiences, and he worked steadily playing “boy-next-door” roles in films such as See Here, Private Hargrove and Her Highness and the Bellboy. He also appeared in Selznick’s Since You Went Away in which he and his wife portrayed doomed young lovers. By that time Selznick and Jones’ affair was common knowledge, and Jones and Walker separated in November 1943, in the midst of production. The filming of their love scenes was torturous as Selznick insisted that Walker perform take after take of each love scene with Jones. She filed for divorce in April 1945.

That year, Walker starred in the film The Clock opposite Judy Garland in her first straight dramatic film. Although Walker continued to work steadily in Hollywood, he was distraught over the divorce and was soon prone to drinking, emotional outbursts and eventually, a nervous breakdown. He spent time at the Menninger Clinic in 1949 where he was treated for a psychiatric disorder.