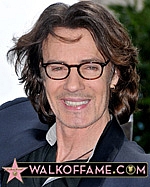 Rick Springfield Honored with
Star on the Hollywood Walk Of Fame

Watch Rick Springfield Walk of Fame star ceremony at the end of this page.

The Hollywood Chamber of Commerce proudly honored performer Rick Springfield with a star on the Hollywood Walk of Fame on Friday, May 9, 2014. “We have been hearing from fans around the world who want to know when Rick Springfield is getting his star,” stated Ana Martinez, Producer of the Walk of Fame ceremonies. “Well, folks the time has come and the fans have flown in from all over the country.”

Emcee Leron Gubler, President & CEO of the Hollywood Chamber of Commerce and guest speakers Doug Davidson, Jason Thompson and singer Richard Marx were on hand to unveil the star for Springfield, in the category of Recording at 7060 Hollywood Boulevard. The star ceremony was streamed live exclusively on www.walkoffame.com.

For all of his accomplishments as an actor, best-selling author, and documentary subject, Rick Springfield’s first love has always been music, a passion he’s harbored since first picking up the guitar at the age of 12 in his native Australia.

With 25-million records sold, 17 Top-40 hits, including “Don’t Talk to Strangers,” “An Affair of the Heart,” “I’ve Done Everything for You,” “Love Somebody” and “Human Touch,” as well as a 1981 Grammy® for Best Male Rock Vocal for his No. 1 hit single “Jessie’s Girl,” Springfield shows no signs of slowing down.

But Springfield’s love for music goes beyond the studio walls where he records his hits.  This iconic rock star has been on the road, touring for more than 30 years. These days, Springfield brings a more intimate, yet still lively show by performing solo in his “Stripped Down” show. He incorporates personal stories about his music and life into the show, and has even added a question and answer segment as a way to truly connect with his audiences. Excited fans and critics have made “Stripped Down” one of the most talked about tours of 2014, receiving rave reviews and sold out shows across the country.

Although his solo tour has been very successful, Springfield will take a break from The Stripped Down Tour as he brings his band back on the road again to co-headline a tour with friends and fellow musicians Pat Benatar and Neil Giraldo. The multi-city tour will kick off on June 28th in Atlanta, GA with additional dates throughout July. This tour marks the first time that Rick will tour with Pat and Neil. Following his summer tour, in October 2014, Springfield will return to his native Australia for his first headline tour in 20 years. He will finish the year with more “Stripped Down” shows.

In 2013 Springfield teamed up with Dave Grohl on Grohl’s multi-faceted passion project, Sound City, which encompassed a documentary (Sound City), an album (Sound City: Real to Reel), and the Sound City Players tour, a string of critically-acclaimed shows with fellow documentary subjects including Stevie Nicks, Trent Reznor, John Fogerty, and Lee Ving among others. The Sound City: Real to Reel CD won the 2014 Grammy® for Best Compilation Soundtrack.

Springfield’s current musical career renaissance can be traced back to the albums Shock/Denial/Anger/Acceptance (2004) and Venus in Overdrive (Ume, 2008), which entered the Billboard sales charts at No. 28, his highest debut in 20 years. In 2005, Sony Legacy’s released the retrospective double CD Written in Rock: The Rick Springfield Anthology.

In the early 70s, Springfield already had a handful of hit records in his native Australia. Once he immigrated to the United States, he resorted to acting, landing the role of Dr. Noah Drake on daytime television’s “General Hospital,” as a way of making ends meet until his musical career took off. And take off it did, with the 1981 success of “Working Class Dog” followed by “Success Hasn’t Spoiled Me Yet,” “Living in Oz,” “Hard to Hold” soundtrack and “Tao.” In addition to “General Hospital” Rick’s other notable TV roles include a four-episode arc on “Californication,” “Hawaii Five-O” and “Drop Dead Diva.”

Prior to his Walk of Fame ceremony, Touchstone will published Springfield’s fiction debut, “Magnificent Vibration” on May 6th.

Springfield’s autobiography, “Late, Late at Night,” published by Simon & Schuster’s Touchstone imprint in 2010, enteredThe New York Times best-seller list at No. 13 and hit the Los Angeles Times and Publishers Weekly lists as well.  Rolling Stone named it one of the Top-25 rock autobiographies of all time. In the book, which he wrote himself, Springfield speaks frankly about the depression he’s battled throughout his life.

Rick Springfield has donated his name, time and talent to: Voices of Uganda, The Hoops for Life Foundation, The Humane Society, and is active in promoting animal rescue and adoption. 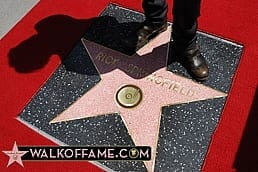