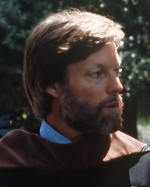 Richard Chamberlain is an American actor of stage and screen who became a teen idol in the title role of the television show Dr. Kildare. George Richard Chamberlain was born in 1934 in Beverly Hills, California, the son of Elsa W. and Charles Chamberlain, who was a salesman. Chamberlain's father was well known within Alcoholics Anonymous, having traveled for years speaking at A.A. conventions. In 1952, Richard Chamberlain graduated from Beverly Hills High School and later attended Pomona College. Chamberlain co-founded a Los Angeles-based theatre group, Company of Angels, and began appearing in TV series in the 1950s. In 1961 he gained widespread fame as the young intern, Dr. Kildare, in the MGM television series of the same name. His singing ability also led to some hit singles in the early 1960s. One of them was the "Theme from Dr. Kildare" entitled "Three Stars Will Shine Tonight", which hit number 10 according to the Billboard Hot 100 Charts. Dr. Kildare ended in 1966, after which Chamberlain began performing on the theatre circuit. In 1966, he was cast opposite Mary Tyler Moore in the ill-fated Broadway musical Breakfast at Tiffany's, co-starring Priscilla Lopez, which, after an out-of-town tryout period, closed after only four previews. Decades later he returned to Broadway in revivals of My Fair Lady and The Sound of Music.

In 1968 he went to England where he played in repertory theatre and in the BBC's Portrait of a Lady adaptation, becoming recognized as a serious actor. In 1969 he starred opposite Katharine Hepburn in the film The Madwoman of Chaillot. While in England he took vocal coaching and in 1969 performed the title role of Hamlet with the Birmingham Repertory Theatre, becoming the first American to play the role since John Barrymore in 1929. He received excellent notices and reprised the role for television, for The Hallmark Hall of Fame, in 1970.