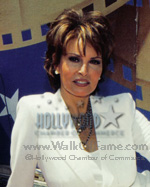 Raquel Welch is an American actress, author and sex symbol. Welch was born Jo Raquel Tejada in Chicago, Illinois, the older sister to brother James and sister Gayle. She was the daughter of Josephine Sarah with English ancestry dating back to John Quincy Adams and the Mayflower, and Armando Carlos Tejada Urquizo, a Bolivian. Her father, an aeronautical engineer, emigrated from La Paz, Bolivia at age 17; her mother was American, the daughter of architect Emery Stanford Hall and wife Clara Louise Adams. Raquel was raised in the Presbyterian religion and continues to go to church every Sunday. Raquel changed her family name to that of her first husband, James Welch, in 1959.

In 1959, Welch played the title role in The Ramona Pageant, a yearly outdoor play at Hemet, California, which is based on the novel Ramona by Helen Hunt Jackson and Bob Biloe.

She became a weather forecaster at KFMB, a local San Diego television station. Because of her heavy schedule, she decided to leave her studies at San Diego State University. Her first marriage broke up and she moved with her two children, Damon and Latanne, to Dallas, Texas, where she modeled for Neiman Marcus and worked as a cocktail hostess, intending to move on to New York City from there.