Penn & Teller Star is Steps Away from the Star of Houdini

Watch the complete star ceremony at the end of this page.

The Hollywood Chamber of Commerce prepped for a magical day when magicians Penn & Teller were honored with star on the famed Walk of Fame on April 5, 2013. “We selected a great spot for the star which was unveiled at 7003 Hollywood Boulevard just steps away from the star of Houdini and right down the street from The Magic Castle!” stated Ana Martinez, Walk of Fame Producer. The Magic Castle will be honoring Penn & Teller the following day on April 6, with the coveted "Magicians of the Year" Award.

Leron Gubler, President & CEO of the Hollywood Chamber of Commerce and guest speakers David Copperfield and Trey Parker helped the duo Penn & Teller unveil the 2,494th Star in the Category of Live Performance at 7003 Hollywood Boulevard down the street from the historic The Magic Castle.

For more than 35 years Penn & Teller have defied labels—and at times physics and good taste– by redefining the genre of magic and inventing their own very distinct niche in comedy.

With sold-out runs on Broadway, world tours, Emmy-winning TV specials and hundreds of outrageous appearances on everything from Letterman to Leno, Friends to The Simpsons, Chelsea Lately to Top Chef, comedy’s only team show no signs of slowing down.

With an amazing six wins, including 2011, as “Las Vegas Magicians of the Year,” their 10-year run at The Rio All-Suite Hotel & Casino makes them one of the longest running and most-beloved shows in Las Vegas history, outselling every other resident magician on The Strip.

Their acclaimed Showtime series, “Penn & Teller: BS!” was nominated for 13 Emmys and is the longest-running series in the history of the network.  The show tackled the fakes and frauds behind such topics as alien abduction, psychics and bottled water. Their newest television venture, “Penn & Teller Tell A Lie” for the Discovery Channel premiered last October and Penn is currently showing his business savvy on the new season of NBC’s “Celebrity Apprentice.”

In the UK, they’ve recently completed the first series of their highly –lauded return to British television, “Penn & Teller: Fool Us!” on which up-and-comers and magic veterans try to fool Penn & Teller for a chance to star in the duos’ hit Las Vegas stage show.

Along the way, they’ve written three New York Times Best-Sellers, hosted their own Emmy nominated variety show for FX, starred in their own Emmy winning specials for ABC, NBC and Comedy Central and produced the critically lauded feature film documentary The Aristocrats.

As individuals, they are just as prolific.  Teller directed a version of Macbeth that toured the East Coast to raves from The New York Times and Wall Street Journal and has written two books.  Penn has written three books, including the 2011 New York Times Best Seller, “God No!”, hosted the NBC game show Identity and donned his ballroom shoes for the 2008 season of ABC’s hit Dancing With The Stars.

With inclusions in the New York Times Crossword Puzzle, as answers on Jeopardy and Who Wants To Be A Millionaire, their status as cultural icons and the preeminent duo in comedy was once again reinforced when Katy Perry personally asked them to co-star in the video for her #1 song, “Waking Up in Vegas.” 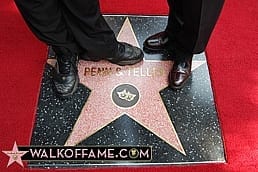