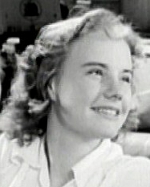 Peggy Ann Garner was an American actress. A successful child actor, Garner played her first film role in 1938 and won the Academy Juvenile Award for her work in A Tree Grows in Brooklyn. Featured roles in such films as Black Widow did not further her attempts to establish herself in mature film roles, and although she progressed to theatrical work, she made relatively few acting appearances as an adult.

Born in Canton, Ohio, Garner's mother pushed her into the limelight, and entered her in talent quests while Garner was still a child. By 1938 she had made her first film appearance and over the next few years appeared in several more films including Jane Eyre and The Keys of the Kingdom. She reached the height of her success at the age of 13 in A Tree Grows in Brooklyn winning an Academy Juvenile Award largely on the basis of this performance.

Like many child performers, Garner was unable to make a successful transition into adult film roles. She guest starred steadily in television roles beginning in the early 1950s and continuing through the 1960s. After her film career ended, she ventured into stage acting and had some success, but also worked as a real estate agent and fleet-car executive between acting jobs in order to support herself. Her final screen performance was a small part in a made for television feature in 1980.

Garner married singer/game show host Richard Hayes, and they divorced in 1953. She went on to marry actor Albert Salmi on May 16, 1956, and they divorced on March 13, 1963. Garner's final marriage was to Kenyon Foster Brown. After a few years, that marriage, too, ended in divorce. Her only child, Catherine Ann Salmi, died in 1995 at age 38 from heart disease. 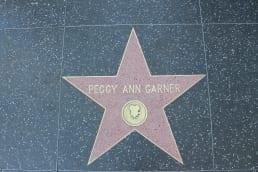