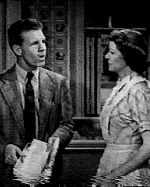 Oswald George “Ozzie” Nelson was an American entertainer and band leader who originated and starred in The Adventures of Ozzie and Harriet radio and television series with his wife and two sons.

The second son of George Waldemar and Ethel Irene Nelson, Ozzie Nelson was born in Jersey City, New Jersey. His ancestry was Swedish and English. Nelson was raised in Ridgefield Park. He graduated from Ridgefield Park High School, where he played on the American football team. The street Nelson grew up on is now named after him. Nelson became an Eagle Scout at 13 and was a recipient of the Distinguished Eagle Scout Award from the Boy Scouts of America. He graduated from Rutgers University, where he also played football despite his slight build. He was a member of the Cap and Skull fraternity, and entered Rutgers School of Law Newark. As a student he made pocket money playing saxophone in a band and coaching football. During the Depression he turned to music as a full-time career.

Ozzie started his entertainment career as a band leader. He formed and led the Ozzie Nelson Band, and had some initial limited success. He made his own ‘big break’ in 1930. The New York Daily Mirror ran a poll of its readers to determine their favorite band. He knew that news vendors got credit from the newspaper for unsold copies by returning the front page and discarding the rest of the issue. Gathering hundreds of discarded newspapers, the band filled out ballots in their favor. They edged out Paul Whiteman and were pronounced the winners.

From 1930 through the 1940s Nelson’s band recorded prolifically?first on Brunswick, then Vocalion, then back to Brunswick, Bluebird, Victor and finally back to Bluebird. Nelson’s records were consistently popular and in 1934 Nelson enjoyed success with his hit song, “Over Somebody Else’s Shoulder” which he introduced. Nelson was their primary vocalist and featured in duets with his other star vocalist, Harriet Hilliard. Nelson’s calm, easy vocal style was popular on records and radio and quite similar to son Rick’s voice and Harriet’s perky vocals added to the band’s popularity.