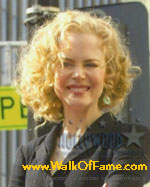 Nicole Mary Kidman, AC is an American-born Australian actress, fashion model, singer and humanitarian. After starring in a number of small Australian films and TV shows, Kidman’s breakthrough was in the 1989 thriller Dead Calm. Her performances in films such as To Die For and Moulin Rouge! received critical acclaim, and her performance in The Hours brought her the Academy Award for Best Actress, a BAFTA Award and a Golden Globe Award. Her other films include the box office hits Days of Thunder, Batman Forever, The Others, Cold Mountain, The Interpreter and Australia.