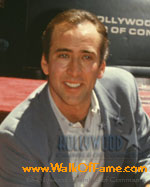 Nicolas Cage is an American actor, producer and director, having appeared in over 60 films including Face/Off, Gone In 60 Seconds, National Treasure, Ghost Rider, Bad Lieutenant: Port of Call New Orleans, and Kick-Ass. Cage becoming the fifth youngest actor ever at age 32 to won the Academy Award for Best Actor for his performance in Leaving Las Vegas.

Cage was born in Long Beach, California. His father, August Coppola, was a professor of literature, while Cage’s mother, Joy Vogelsang, is a dancer and choreographer; Cage’s parents divorced in 1976. Cage’s mother is of German descent and his father is of Italian descent. His paternal grandparents were Carmine Coppola, a composer, and Italia Pennino, an actress. Through his father, Cage is the nephew of director Francis Ford Coppola and actress Talia Shire, as well as the cousin of directors Roman Coppola and Sofia Coppola, late film producer Gian-Carlo Coppola, and actors Robert Carmine and Jason Schwartzman. Cage’s two brothers are Christopher Coppola, a director; and Marc “The Cope” Coppola, a New York radio personality. He was raised Roman Catholic. Cage attended Beverly Hills High School, which is known for its many alumni who became entertainers, and aspired to act from an early age. Cage also attended UCLA School of Theatre, Film, and Television. His first non-cinematic acting experience was in a school production of Golden Boy.

To avoid the appearance of nepotism as the nephew of Francis Ford Coppola, he changed his name early in his career to Nicolas Cage, inspired in part by the Marvel Comics superhero Luke Cage. Since his minor role in the film Fast Times at Ridgemont High, with Sean Penn, Cage has appeared in a wide range of films, both mainstream and offbeat. He tried out for the role of Dallas Winston in his uncle’s film The Outsiders, based on S.E. Hinton’s novel, but lost to Matt Dillon. He was also in Coppola’s films Rumble Fish and Peggy Sue Got Married.