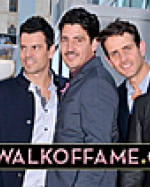 Watch New Kids on the Block unveil their star on Walk of Fame below.

The Hollywood Chamber of Commerce  proudly dedicated the 2,530th  Walk of Fame star to multi-platinum selling, award-winning performers New Kids on The Block today, Thursday, October 9, 2014 at 11:30 a.m. The star is located at 7072 Hollywood Boulevard. “Fans have been asking for quite a while now when the New Kids on The Block were going to get their star. We want to thank them for “Hangin’ Tough” for waiting patiently to see their favorite boy band’s star ceremony,” stated Ana Martinez, producer of the Walk of Fame ceremonies. “Fans from all over the United States and the world have flocked to Hollywood for this special day!”  Helping Emcee and Hollywood Chamber President/CEO, Leron Gubler to unveil the star in the category of Recording was Arsenio Hall. The event was streamed live on www.walkoffame.com.

New Kids on The Block was formed in 1984 in Boston, Massachusetts. Jordan Knight, Jonathan Knight, Joey McIntyre, Donnie Wahlberg, and Danny Wood signed with Columbia Records and their first album entitled “New Kids on The Block” was released. Their popularity grew with the releases “Hanging Tough” and “Please Don’t Go Girl.” The following year the New Kids were touring the country and their songs were reaching the Billboard Hot 100 Singles Charts. In 1990, the group won two American Music Awards and earned a Grammy nomination. By 1994, the group disbanded and went their own ways. By that time, they had sold 80 million albums, shattered concert box office records playing an estimated 200 concerts a year worldwide and grossed more than one billion dollars. They achieved five platinum albums,  ten top 10 singles, and five No. 1 singles.

After 15 years out of the spotlight, the 21st century saw the boys from Boston stage one of the biggest and most anticipated reunions of all time. In 2008, they officially revealed their return on The Today Show. An enormous crowd gathered at Rockefeller Center for their first comeback performance, and everything snowballed once again from that magical moment.

Their long-awaited fifth album, “The Block,” debuted at No. 2 on the Billboard Top 200.  Galvanized with new tunes including hot collaborations with Lady Gaga and Ne-Yo.

Not to mention, in the early ’90s, the band had smashed box office records performing 200 concerts per year at stadiums across the globe and were named “highest paid entertainers of 1990” by Forbes Magazine. However, they weren’t content to simply rest on their laurels in the '00s. Instead, they upped the ante immensely with a series of career firsts over two decades into their illustrious legacy.

Since reuniting, the band has gone on to tour to sold-out arenas worldwide.  One of those sold-out tours even included a once in a lifetime stop at Fenway Park.  The Boston pop icons brought their brainchild NKOTBSB to the famed stadium as part of the historic NKOTBSB Tour. Selling out 140 arena shows on their reunion jaunt and numerous co-headline dates, the Fenway Park gig remains a high watermark for the group.

In April 2013, New Kids released their sixth studio album 10, which debuted at number six on the Billboard 200 chart. Following the release, they co-headlined The Package Tour along with 98 Degrees and Boyz II Men. The wildly successful tour spanned nearly 50 shows across North America before concluding in August 2013. Most recently, NKOTB completed the New Kids On The Block After Dark, the exclusive four day engagement at The AXIS in Las Vegas from July 10-13. The four incredible shows were part of the ultimate Vegas weekend that included concerts, pool parties and after parties – and were the exclusive North American tour dates in 2014.

In the midst of it all, New Kids On The Block always find time to continually give back. In 2009, the guys and their fans started supporting the Susan G. Komen for the Cure Foundation. Since then, they’ve collectively raised in excess of $200,000 towards finding a cure for breast cancer. Fans continue to host fundraisers and jumpstart events like “Race for the Cure” and “3-Day for the Cure” teams furthering the cause. After losing his mother to the disease, Wood created “Remember Betty” to celebrate her memory. Their charitable pursuits extend even farther. Supporting Toys For Tots in 2010, they put on an intimate show at the Boston House of Blues, and the hometown gig sold out in a matter of minutes and raised over $60,000 for the charity.

There are even more firsts on the horizon for New Kids On The Block though, and they've still got "the right stuff" after all these years. 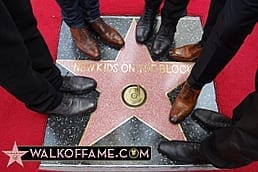