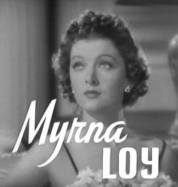 Myrna Loy was an American actress. Trained as a dancer, she devoted herself fully to an acting career following a few minor roles in silent films. Originally typecast in exotic roles, often as a vamp or a woman of Asian descent, her career prospects improved following her portrayal of Nora Charles in The Thin Man. Her successful pairing with William Powell resulted in fourteen films together, including several subsequent Thin Man films.

Loy was born Myrna Adele Williams to Adelle Mae and rancher David Franklin Williams in Radersburg, Montana, a small town near Helena. She was of Welsh and Scottish ancestry. Loy’s first name came from a train station whose name her father liked. Her father was also a banker and real estate developer and the youngest man ever elected to the Montana state legislature. Her mother studied music at the American Conservatory of Music in Chicago.

During the winter of 1912, Loy’s mother nearly died from pneumonia, and her father sent his wife and daughter to La Jolla, California. Loy’s mother saw great potential in Southern California, and during one of his visits she encouraged her husband to purchase real estate there. Among the properties he bought was land he later sold at a considerable profit to Charlie Chaplin so the filmmaker could construct his studio there. Although Loy’s mother tried to convince her husband to move to California permanently, he preferred ranch life and the three eventually returned to Montana. Soon after, Loy’s mother needed a hysterectomy and insisted Los Angeles was a safer place to have it, so she, Loy, and Loy’s brother David moved to Ocean Park, where Loy began to take dancing lessons. They continued after she returned to Montana, and at the age of twelve Myrna Williams made her stage debut performing a dance she choreographed based on The Blue Bird from the Rose Dream Operetta at Helena’s Marlow Theater.

Following her father’s death, Loy and her family fulfilled her mother’s dream by moving to Culver City. She attended the exclusive Westlake School for Girls in Holmby Hills and continued to study dance in Downtown Los Angeles. When her teachers objected to her participating in theatrical arts, her mother enrolled her in Venice High School, and at fifteen she began appearing in local stage productions.