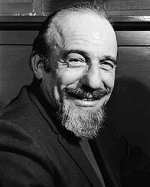 Mitchell William “Mitch” Miller was an American musician, singer, conductor, record producer, A&R man and record company executive. Miller was one of the most influential figures in American popular music during the 1950s and early 1960s, both as the head of Artists and Repertoire at Columbia Records and as a best-selling recording artist with an NBC television series, Sing Along with Mitch. A graduate of the Eastman School of Music of the University of Rochester in the early 1930s, Miller began his musical career as an accomplished player of the oboe and English horn, and recorded several highly regarded classical albums featuring his instrumental work, but he is best remembered as a conductor, choral director, television performer and recording executive.

Mitch Miller was born in Rochester, New York, on July 4, 1911, to a Jewish family. His mother was Hinda Rosenblum Miller, a former seamstress, and his father, Abram Calmen Miller, a Russian immigrant wrought-iron worker. He had four siblings, two of whom, Leon and Joseph, survived him.

He was married for sixty-five years to the former Frances Alexander, who died in 2000. They had two daughters; Andrea Miller, and Margaret Miller Reuther; and a son, Mitchell “Mike” Miller; and two grandchildren and two great-grandchildren. Mitch lived in New York City for many years and died there on July 31, 2010, after a short illness.

Miller took up the oboe at first as a teenager, because it was the only instrument available when he went to audition for his junior high school orchestra. A talented oboist, at age fifteen he played with the Syracuse Symphony Orchestra and after graduating from high school he attended the Eastman School of Music in Rochester. He graduated in 1932 with honors.