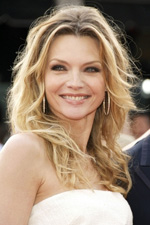 Michelle Marie Pfeiffer is an American actress. She made her screen début in 1980, but first garnered mainstream attention with her appearance in Scarface. She rose to prominence during the late 1980s and early 1990s, during which time she gave a series of critically-acclaimed performances in the films Dangerous Liaisons, Married to the Mob, The Fabulous Baker Boys, The Russia House, Frankie and Johnny, Love Field, and The Age of Innocence, as well as appearing as Catwoman, the feline anti-heroine of Batman Returns. Pfeiffer has been nominated for an Academy Award three times: Best Supporting Actress for Dangerous Liaisons, Best Actress for The Fabulous Baker Boys, and Best Actress for Love Field. She won a Golden Globe Award for The Fabulous Baker Boys, a BAFTA Award for Dangerous Liaisons, and the Silver Bear for Best Actress for Love Field. She has a star on the Hollywood Walk of Fame, at 6801 Hollywood Boulevard.

Pfeiffer appeared on the cover of People’s first “50 Most Beautiful People in the World” issue in 1990, and again in 1999, having made the list a record six times during the decade.

Pfeiffer was born in Santa Ana, California, the second of four children of Richard Pfeiffer, a heating and air-conditioning contractor, and Donna, a homemaker. She has one elder brother, Rick, and two younger sisters, Dedee Pfeiffer and Lori Pfeiffer, both actresses. Her father was of German, Dutch, and Irish descent, and her mother was of Swiss and Swedish ancestry. The family moved to Midway City, California, where Pfeiffer spent her childhood. She attended Fountain Valley High School and graduated within three years and worked as a check-out girl at Vons supermarket. She then attended Golden West College where she was a member of the Alpha Delta Pi sorority. After a short stint training to be a court stenographer, she decided upon an acting career, and entered the Miss Orange County Beauty Pageant in 1978, and the Miss Los Angeles contest later that year, after which she was signed by a Hollywood agent who appeared on the judging panel. Moving to Los Angeles, she began to audition for commercials and bit parts in films.