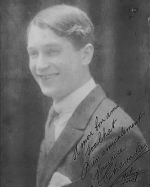 Maurice Auguste Chevalier was a French actor, singer, and popular vaudeville entertainer. Chevalier’s signature songs included “Louise”, “Mimi”, “Valentine”, and “Thank Heaven for Little Girls”. His trademark was a boater hat, which he always wore on stage with his tuxedo. He was born in Paris to a house painter father and a mother of Belgian descent. He made his name as a star of musical comedy, appearing in public as a singer and dancer at an early age.

He worked in a number of jobs; A carpenter’s apprentice, electrician, printer and even as a doll painter. He started in show business in 1901. He was singing, unpaid, at a café when a member of the theatre saw him and suggested he try for a local musical. He got the part. Chevalier made a name as a mimic and a singer. His act in l’Alcazar in Marseille was so successful, he made a triumphant rearrival in Paris.

In 1909, he became the partner of the biggest female star in France, Fréhel. However, due to her alcoholism and drug addiction, their liaison ended in 1911. Chevalier then started a relationship with 36-year-old Mistinguett at the Folies Bergère where he was her 18 year old dance partner; they eventually played out a public romance.