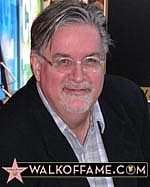 The Hollywood Chamber of Commerce honored Matt Groening with a star on the Hollywood Walk of Fame on Valentine’s Day February 14, 2012 just steps away from his character’s The Simpsons star at 7021 Hollywood Boulevard. As a special treat for the media, Doh’nuts, Homer’s favorite snack were served. Emcee Leron Gubler, President/CEO of Hollywood Chamber of Commerce and guest speakers Hank Azaria (voice of Moe, Chief Wiggum and others), Nancy Cartwright (voice of Bart Simpson), and Yeardley Smith (voice of Lisa Simpson) helped unveil the 2,461st Star in the Category of Television.

Matt Groening was born in Portland, Oregon, on February 15, the third of five children.  His father, Homer, was a cartoonist and filmmaker.  From an early age, Matt created his own cartoons, amusing his friends and annoying his teachers.  Groening attended Evergreen State College in Washington State, where he studied philosophy and continued his interest in cartoons, comics and music.

After his graduation in 1977, Groening headed to Los Angeles where he struggled in immobilizing but irksome poverty.  Increasingly frustrated by the traffic, smog, and his landlords, Matt began to vent his angst to his friends by sending them cartoons starring a bug-eyed rabbit named Binky.  Groening soon began to publish and sell these cartoons at the record shop where he worked.  Their popularity encouraged Matt to syndicate, and in April 1980, Life In Hell® formally debuted in the Los Angeles Reader.  He formed Acme Features Syndicate, which today circulates Life in Hell® to more than 250 newspapers around the world in a half-dozen languages.

Life in Hell® has also been collected in a best-selling series of books with more than two million copies in print, including Love is Hell, Work is Hell, School is Hell, Childhood is Hell, Akbar & Jeff’s Guide to Life, Greetings From Hell, The Big Book of Hell, With Love From Hell, How to Go to Hell, The Road to Hell, Binky’s Guide to Love, and Love is Still Hell. (That is a hell of a lot of books!)

In 1987 James L. Brooks approached Matt about creating animated shorts to fit between sketches of “The Tracey Ullman Show.”  Matt agreed, but instead of using the Life in Hell® characters, he created an entirely new cast:  The Simpsons, which bear the names of his family members, Homer, Marge, Lisa and Maggie (Bart is an anagram for brat).

The Simpsons were soon spun off into a half-hour animated series which first aired on December 17, 1989 with a Christmas special, followed by the series premiere on January 14, 1990.  It has since gone on to become the longest-running scripted show in television history.  An international hit, the series has also spawned a licensing and merchandising empire.  THE SIMPSONS celebrate its 500th episode on Sunday, Feb. 19 at 8PM ET/PT on FOX and fans can enjoy more from THE SIMPSONS with never-before-seen footage and extras on Blu-ray and DVD.

Groening has forever left an indelible mark on society.   Voted the “Best Show of the 20th Century” by Time Magazine, the series has left a path of catch-phrases (Homer’s “D’oh!” and Bart’s “Eat my shorts”) and societal commentary. It has also given birth to a theme park ride and United States postage stamps, personally designed by Groening. He served as producer and writer during the four-year process of the long-awaited hit feature film The Simpsons Movie, released in July 2007.

For more information and to view who shares a star with Matt Groening on the Hollywood Walk of Fame, visit www.walkoffame.com 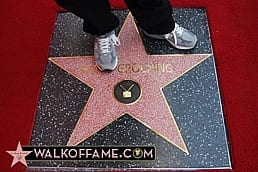