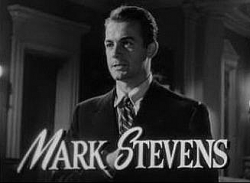 Mark Stevens was an American actor. Born Richard William Stevens in Cleveland, Ohio, he first studied to become a painter before becoming active in theater work. He then launched a radio career as an announcer in Akron, Ohio.

Moving to Hollywood, he became a Warner Brothers contract actor at $100 a week in 1943. The studio darkened and straightened his curly ginger-colored hair and covered his freckles. At first he was billed as Stephen Richards, but it was changed to Mark Stevens at the suggestion of Darryl Zanuck when he moved to 20th Century Fox.

Stevens emerged as a film noir leading man in such films as Within These Walls and The Dark Corner, the latter pairing him with Lucille Ball. He played an FBI man going undercover to arrest a gangster played by Richard Widmark in The Street with No Name, and appeared as Olivia de Havilland’s loyal husband in The Snake Pit. Stevens also performed in musicals including I Wonder Who’s Kissing Her Now? and Oh, You Beautiful Doll. From 1954-1956, he played a newspaper managing editor in the CBS series Big Town, having replaced Patrick McVey, who starred in the role from 1950-1954.