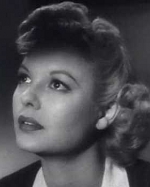 Marjorie Reynolds was an American film actress. She appeared in more than 70 films.

Born Marjorie Goodspeed, in Buhl, Idaho, as her parents made the cross-country trip from Maine to settle in California, she was featured as a child actress

in silent films such as Scaramouche. Her first speaking role was in Murder in Greenwich Village. She also appeared in bit parts in many A-pictures including Gone with the Wind. A stand-out role for Reynolds was as the waitress and loyal girlfriend opposite wrongly-accused Richard Cromwell in Universal Pictures’s anti-Nazi action drama entitled, Enemy Agent. That same year, in The Fatal Hour, Reynolds appeared for Monogram Pictures as a reporter on the trail of Boris Karloff’s detective James Lee Wong, and opposite Grant Withers as a cop. Her later films included Holiday Inn, Fritz Lang’s Ministry of Fear and Up in Mabel’s Room. Her career progression was hindered by the premature death of her mentor, Mark Sandrich.