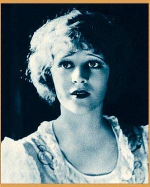 Marguerite De La Motte was an American film actress, most notably of the silent film era.

Born in Duluth, Minnesota, De La Motte began her entertainment career studying ballet under Anna Pavlova. In 1919 she became the dance star of Sid Grauman on the stage of his theater. In 1918, at the age of 16, she made her screen debut in the Douglas Fairbanks, Sr directed romantic comedy film Arizona. That same year she lost both of her parents in an automobile accident and film producer J.L. Frothingham assumed guardianship of her and her younger sister.

De La Motte spent the 1920s appearing in numerous films, often cast by Douglas Fairbanks, Sr. to play opposite him in swashbuckling adventure films such as 1920’s The Mark of Zorro and The Three Musketeers. She developed a close friendship with Fairbanks and his wife, actress Mary Pickford. De La Motte would also appear opposite such notable actors of the “Roaring Twenties” as Bela Lugosi, Milton Sills, Conrad Nagel, Owen Moore, Lon Chaney, John Gilbert and Noah Beery, Sr.

De La Motte’s career as an actress slowed dramatically at the end of the silent film era of the 1920s. She did continue acting in bit parts through the sound era and made her final appearance in the 1942 film Overland Mail opposite both Noah Beery, Sr. and Noah Beery, Jr., as well as Lon Chaney, Jr.