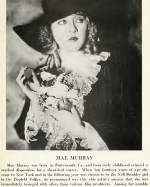 Mae Murray was an American actress, dancer, film producer, and screenwriter. Murray rose to fame during the silent film era and was known as “The Girl with the Bee-Stung Lips” and “The Gardenia of the Screen”.

Born Marie Adrienne Koenig in Portsmouth, Virginia, she first began acting on the Broadway stage in 1906 with dancer Vernon Castle. In 1908, she joined the chorus line of the Ziegfeld Follies, moving up to headliner by 1915. Murray became a star of the club circuit in both the United States and Europe, performing with Clifton Webb, Rudolph Valentino, and John Gilbert as some of her many dance partners.

In 1908, she was briefly married to stockbroker William M. Schwenker, Jr. In 1916, she married Olympic bobsled champion Jay O’Brien and made her motion picture debut in To Have and to Hold that same year. She became a major star for Metro-Goldwyn-Mayer, starring with Rudolph Valentino in The Delicious Little Devil and Big Little Person in 1919. At the height of her popularity, Murray formed her own production company with her director, John M. Stahl. Critics were sometimes less than thrilled with her over-the-top costumes and exaggerated emoting, but her films were financially successful.

After divorcing Jay O’Brien in 1917, Murray married the movie director Robert Z. Leonard the following year and, beginning in 1925, Murray, Leonard, and Stahl produced films at Tiffany Pictures, with Souls for Sables, starring Claire Windsor and Eugene O’Brien, as the first film made by Tiffany. For a brief period of time, Murray wrote a weekly column for newspaper scion William Randolph Hearst.