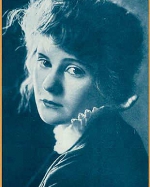 Mae Marsh was an American film actress with a career spanning over 50 years.

The most frequently told of many stories of Marsh’s childhood is that her father, a railroad auditor, died when she was four. Her family moved to San Francisco where her stepfather was killed in the great earthquake of 1906. Her great-aunt then took Mae and Marguerite, her older sister, to Los Angeles, hoping her show business background would open doors for jobs at various movie studios needing extras. However, her father, S. Charles Marsh, was a bartender, not a railroad auditor, and he was alive at least as late as June 1900, when Mae Marsh was nearly six. Her stepfather, oil-field inspector William Hall, could not have been killed in the 1906 earthquake, as he was alive, listed in the 1910 census, living with her mother, May nee Warne, and sisters.

Marsh worked as a salesgirl and loitered around the sets and locations while her older sister worked on a film, observing the progress of her sister?s performance. She first started as an extra in various movies, and played her first starring role in the film Ramona at the age of 15.

?I tagged my way into motion pictures,? Marsh recalled in The Silent Picture. ?I used to follow my sister Marguerite to the old Biograph studio and then, one great day, Mr. Griffith noticed me, put me in a picture and I had my chance. I love my work and though new and very wonderful interests have entered my life, I still love it and couldn?t think of giving it up.?