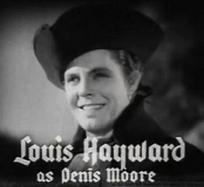 Born in Johannesburg, Hayward’s screen work began in British films, notably as Simon Templar in Leslie Charteris’ In 1939 he played a dual role in The Man in the Iron Mask.

During World War II, Hayward enlisted in the United States Marine Corps and commanded a photographic unit that filmed the Battle of Tarawa in a documentary titled With the Marines at Tarawa (winner of the 1944 Academy Award for Best Documentary. Hayward was awarded the Bronze Star Medal

He also played the role of Philip Lombard in the 1945 version of And Then There Were None. Hayward starred in the 1954 television series The Lone Wolf. Hayward’s other television work includes a role as a judge in an episode, “Day of Reckoning”, of the Alfred Hitchcock Hour.