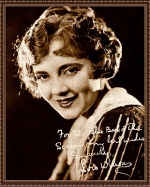 Lois Wilson was an American actress best known for her work during the silent film era.

Born in Pittsburgh, Pennsylvania, Wilson’s family moved to Alabama when she was still very young. After becoming a schoolteacher, Wilson moved to California when she won a beauty contest put on by Universal Studios in 1915. Upon arriving in Hollywood, she secured a small part in The Dumb Girl of Portici, which starred the ballerina Anna Pavlova.

After appearing in several films at various studios, Wilson settled in at Paramount Pictures in 1919, where she remained until 1927. She was a WAMPAS Baby Star of 1922, and all told, appeared in 150 movies. Her most recognized screen portrayals are Molly Wingate in The Covered Wagon and Daisy Buchanan in the silent film version of The Great Gatsby. She acted opposite such leading male stars of her era as Rudolph Valentino and John Gilbert.

Wilson played both romantic leads and character parts. Despite making a successful transition to sound, Wilson was dissatisfied with the roles she received in the 1930s and she soon retired in 1941, making only three films after 1939. Lois ventured to Broadway and television following her final role in The Girl From Jones Beach with Ronald Reagan. Wilson played in the network soap operas The Guiding Light in and The Edge of Night. She portrayed featured character roles.