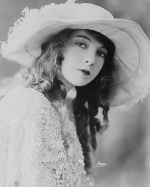 Lillian Diana Gish was an American stage, screen and television actress whose film acting career spanned 75 years, from 1912 to 1987.

She was a prominent film star of the 1910s and 1920s, particularly associated with the films of director D.W. Griffith, including her leading role in Griffith’s seminal Birth of a Nation. Her sound-era film appearances were sporadic, but included memorable roles in the controversial western Duel in the Sun and the offbeat thriller Night of the Hunter. She did considerable television work from the early 1950s into the 1980s, and closed her career playing, for the first time, opposite Bette Davis in the 1987 film,

The Whales of August.

The American Film Institute named Gish 17th among the greatest female stars of all time. She was awarded an Honorary Academy Award in 1971, and in 1984 she received an AFI Life Achievement Award.