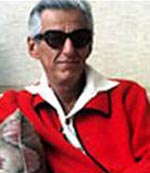 The New York Times called him “The Last of the Hollywood Moguls,” but it may have been the late Jack Valenti who best described the legendary Lew Wasserman’s place in the entertainment firmament when he said: “If Hollywood is Mount Olympus, Lew Wasserman is Zeus.”

During a career spanning more than six decades, Wasserman helped create the entertainment industry as we know it today. Under his leadership, the Music Corporation of America (MCA) became Hollywood’s dominant talent agency, the first studio to release a summer movie blockbuster and the original modern multimedia empire. Wasserman also gave the industry, through his savvy political activities, its public voice and, through his extensive philanthropic enterprises, its heart.

Born in Cleveland in 1913, Wasserman worked as a movie theater usher while still a teenager. As a young man he landed a job handling advertising and promotion for a local nightclub that booked bands through the Music Corporation of America. He soon caught the eye of MCA’s founder, Dr. Jules C. Stein and in 1936 became Stein’s national director of advertising and public relations. Just ten years later, Stein turned over the agency to his former protégé.

As president of MCA in the 1940s, Wasserman represented such top talent as Bette Davis, Jimmy Stewart, Judy Garland, Henry Fonda and Alfred Hitchcock and almost single-handedly brought about an end to the onerous long-term actor contracts that turned even big names into studio property. He forged a landmark deal for Stewart that gave his client a share of a movie’s profits and wide-ranging creative control, an arrangement that is the norm for A-list talent today.

In the 1950’s, Wasserman recognized the commercial promise of television and persuaded a wary Hollywood to accept the new medium as a partner rather than a feared competitor. He oversaw the creation of the TV division that through the decades would go on to produce dozens of hit shows ranging from “Alfred Hitchcock Presents” and “Marcus Welby, M.D.” to “Miami Vice” and “Murder, She Wrote.”

In the 1960’s, he bolstered Hollywood’s political clout by organizing highly successful fund-raising campaigns, most notably for the Democratic Party. Never an ideologue, however, Wasserman forged close ties with top politicians on both sides of the aisle. He was instrumental in helping Ronald Reagan become president of the Screen Actors Guild and the two men remained good friends during Reagan’s years in the California Statehouse and the White House. He also was close to President Lyndon Johnson and was one of the first Hollywood executives to get to know Bill Clinton when the future president was still a little-known Arkansas governor.

In the 1970’s, Mr. Wasserman’s deft marketing of Steven Spielberg’s Jaws created the summer blockbuster as we now know it. He went on to finance and release such acclaimed and commercially successful Spielberg classics as Jurassic Park, E.T. and Schindler’s List. The director, whose first film, the made-for-television thriller “Duel” was also produced by MCA subsidiary Universal TV, called Wasserman “the chief justice of the film industry; fair, tough-minded, and innovative.”

Among the other enduring films produced by Universal during Wasserman’s tenure were Psycho, Oscar® winners The Sting and Out of Africa and beloved comedies Animal House and Back to the Future.

The original architect of today’s multi-faceted entertainment conglomerates, Wasserman pioneered the idea of integrating diverse media units and leveraging successes in one business into profitable ventures for another. Every year, the Universal Studios theme park he built attracts millions of visitors to Southern California. Meanwhile, MCA’s music arm boasted top acts across the popular spectrum including Nirvana, Reba McEntire and Elton John.

In 1990, as media giants including Time Warner and News Corp. rose to prominence, Wasserman sold MCA to the Matsushita Company of Japan. Even after relinquishing the helm of the company, Wasserman remained Hollywood’s sage patriarch. Top executives, union leaders and politicians lined up to seek his counsel on matters great and small.

Wasserman’s philanthropic causes were numerous and included the Motion Picture & Television Fund in Woodland Hills, a health and human service organization dedicated to serving over 100,000 entertainment industry workers each year, and the prestigious Jules Stein Eye Institute at UCLA. He also helped Dorothy Chandler raise the funds to build the Los Angeles Music Center. In 1995, President Clinton awarded Wasserman the country’s highest civilian honor, the Presidential Medal of Freedom, for his contributions to the Research to Prevent Blindness foundation and other charitable efforts.

After Wasserman died at the age of 89 in 2002, Clinton commented: “He was one of the smartest men I ever met, and in more than intellectual ways. He just came across as someone who understood what life was all about and was pulling for people to have good lives.”

The Wasserman family, including his wife Edie, their daughter Lynne and grandchildren Casey and Carol, remains committed to the causes for which he cared so deeply. Casey Wasserman is the President and Chief Executive Officer of the Wasserman Foundation, founded by Lew and Edie in 1952, and the organization continues its work to benefit the community and assist those in need.

Throughout his long career, Wasserman avoided the limelight. “Publicity is for clients, not for us,” he often told his colleagues. But while he may have shunned attention, his profound and lasting impact on the entertainment business and philanthropy will never be forgotten.