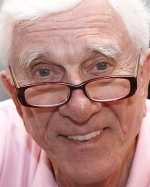 Leslie William Nielsen, OC is a Canadian actor and comedian. Although Nielsen’s acting career crosses a variety of genres in both television and films, he has achieved his greatest film successes as Commander John J. Adams in the film Forbidden Planet, and also in comic movies, including Airplane! and The Naked Gun series. His portrayal of serious characters seemingly oblivious to their absurd surroundings gives Nielsen a reputation as a comedian.

Leading roles in the science fiction classic Forbidden Planet and as the ship’s captain in The Poseidon Adventure came long before Nielsen considered a turn to comedy. His deadpan delivery as a doctor in 1980’s Airplane! marked a turning point in Nielsen’s career, one that would make him, in the words of film critic Roger Ebert, “the Olivier of spoofs.” He may be best known for his roles as Frank Drebin in The Naked Gun, Dr. Rumack in Airplane!, as well as President Harris in the Scary Movie series. Nielsen has appeared in over 100 films and 1,500 television programs over the span of his career, portraying over 220 characters.

Nielsen was born on February 11, 1926 in Regina, Saskatchewan, to Ingvard and Maybelle Nielsen. His father was a Danish, and his mother was a Welsh. Nielsen had two brothers, his older brother, Erik Nielsen, was Deputy Prime Minister of Canada during the 1980s. Their uncle Jean Hersholt was a prominent silent-film actor best known for his portrayal of Dr. Christian in the long-running radio series of the same name and the subsequent television series and films. In a 1994 The Boston Globe article, Nielsen explained, “I did learn very early that when I would mention my uncle, people would look at me as if I were the biggest liar in the world. Then I would take them home and show them 8-by-10 glossies, and things changed quite drastically. So I began to think that maybe this acting business was not a bad idea, much as I was very shy about it and certainly without courage regarding it. My uncle died not too long after I was in a position to know him. I regret that I had not a chance to know him better.”

Nielsen spent several years living in Fort Norman, Northwest Territories when his father was stationed there with the Royal Canadian Mounted Police. Following his graduation from Victoria Composite High School in Edmonton, at the age of seventeen, Nielsen enlisted in the Royal Canadian Air Force and was trained as an aerial gunner during the latter part of World War II. He briefly worked as a disc jockey at a radio station in Calgary, Alberta, before enrolling at the Lorne Greene Academy of Radio Arts in Toronto. When he was studying in Toronto, Nielsen received a scholarship for the Neighborhood Playhouse, he noted, “I couldn’t refuse, but I must say when you come from the land of the snow goose, the moose and wool to New York, you’re bringing every ton of hayseed and country bumpkin that you packed. As long as I didn’t open my mouth, I felt a certain security. But I always thought I was going to be unmasked: ‘OK, pack your stuff.’ ‘Well, what’s the matter?’ ‘We’ve discovered you have no talent; we’re shipping you back to Canada.'” He moved to New York City for his scholarship, and studied theater and music at the Neighborhood Playhouse, while performing in summer stock theatre. Afterward, he attended the Actors Studio, before making his first television appearance, in 1948, on an episode of Studio One, alongside Charlton Heston, for which he was paid US$75.