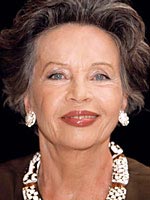 Ms. Caron defined the Golden Age of Hollywood. Appearing in classic MGM Musicals, she was the epitome of chic, glamour, talent and sophistication. Women wanted to be her and men wanted to be with her.

Discovered in 1950 by Gene Kelly for "An American in Paris", Leslie Caron did, during her contract with MGM, a series of notable films: Lili for which she was nominated for an Academy Award- The Glass Slipper, where she did her best ballet dancing -The Academy Award-winning film Gigi with Maurice Chevalier – Fanny, again with Maurice Chevalier – The L-Shaped Room for which she was nominated for an Oscar and won the Golden Globe – Father Goose with Cary Grant – and more recently, Damage for Louis Malle, then Chocolat for Lasse Hallstrom and Le Divorce for James Ivory. She won an Emmy in 2007 for her guest role as a rape victim in "Recall" an episode of "Law & Order: SVU."

Viking Penguin Publishing recently released her autobiography, "Thank Heaven" this past November 30th. The book is already in reprint in England where it was launched in October. Caron will be donating a signed copy of the book to the Hollywood Chamber of Commerce where the Johnny Grant Research Library is housed.

Caron is currently preparing to appear in Paris in Steven Sondheim's "A Little Night Music", which starts rehearsals in January. She will play Mrs. Armfeldt, with Kristin-Scott Thomas as Desiree and Lambert Wilson as Frederick.

Caron is a member of Amnesty International and supports the following philanthropic organizations: International Foundation for Research in Paraplegia; The Salvation Army; CCFD, which is Action Against Starvation; and Foundation Abbee Pierre, which helps the homeless and refugees.