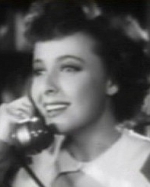 Laraine Day was an American actress and a former MGM contract star.

Born La Raine Johnson in Roosevelt, Utah, to a prominent Mormon family, she later moved to California where she began her acting career with the Long Beach Players.

In 1937 she debuted onscreen in a bit part in Stella Dallas; shortly afterwards she won lead roles in several George O’Brien westerns at RKO, in which she was billed as “Laraine Hays” and then Laraine Johnson.

In 1939 she signed with MGM, going on to become popular and well-known as “Nurse Mary Lamont”, the title character’s fiancee in a string of seven “Dr. Kildare” movies beginning with Calling Dr. Kildare, with Lew Ayres in the title role.