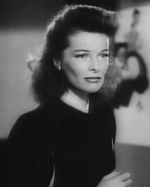 Katharine Houghton Hepburn was an American actress of film, television and stage.

Hepburn holds the record for the most Best Actress Oscar wins with four, from 12 nominations. Hepburn won an Emmy Award in 1976 for her lead role in Love Among the Ruins, and was nominated for four other Emmys, two Tony Awards and eight Golden Globes. In 1999, the American Film Institute ranked Hepburn as the greatest female star in the history of American cinema.