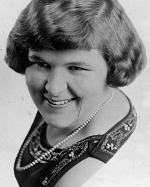 Kathryn Elizabeth “Kate” Smith was an American singer, best known for her rendition of Irving Berlin’s “God Bless America”. Smith had a radio, television, and recording career spanning five decades, reaching its pinnacle in the 1940s.

Smith was born in Greenville, Virginia. Her professional musical career began in 1930, when she was discovered by Columbia Records vice president Ted Collins, who became her longtime partner and manager. Collins put her on radio in 1931. She sang the controversial top twenty song of 1931, “That’s Why Darkies Were Born”. She appeared in 1932 in Hello Everybody!, with co-stars Randolph Scott and Sally Blane, and in the 1943 wartime movie This is the Army she sang “God Bless America”.

Smith began recording in 1926; in 1931, she sang “Dream a Little Dream of Me.” Her biggest hits were “River, Stay ‘Way From My Door”, “The Woodpecker Song”, “The White Cliffs of Dover”, “Rose O’Day”, “I Don’t Want to Walk Without You”, “There Goes That Song Again”, “Seems Like Old Times”, and “Now Is the Hour”. Her theme song was “When the Moon Comes Over the Mountain”; she had helped write the lyrics. Smith greeted her audience with “Hello, everybody!” and signed off with “Thanks for listenin’.”

Her 1932 film, “Hello, Everybody” was released around the same time as Mae West’s “She Done Him Wrong” at a time when Paramount was in deep financial trouble. Paramount initially promoted Smith’s film and it proved to be disappointing at the box office. On the other hand, West’s first starring film was a huge success. This situation added to the ridicule of Smith’s size and appearance, but she was featured in a number of Paramount shorts without issue. She continued to be successful on radio throughout the 1930’s into the 1940’s.