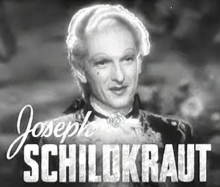 Joseph Schildkraut was an Austrian stage and film actor.

Born in Vienna, Austria, Schildkraut was the son of stage actor Rudolph Schildkraut. The younger Schildkraut moved to the United States in the early 1900s. He appeared in many Broadway productions. Among the plays that he starred in was a notable production of Peer Gynt.

In 1921, Schildkraut played the title role in the first American stage production of Ferenc Molnár’s Liliom, the play that would eventually become the basis for Rodgers and Hammerstein’s Carousel. He then began working in silent movies, although he did return to the stage occasionally. He had early success in film as the Chevalier de Vaudrey in D.W. Griffith’s Orphans of the Storm with Lillian Gish. Later, he was featured in Cecil B. DeMille’s epic 1927 film The King of Kings, as Judas Iscariot. Schildraut’s father Rudolf also appeared in the film. Joseph Schildkraut also played a Viennese-accented, non-singing Gaylord Ravenal in the 1929 part-talkie film version of Edna Ferber’s Show Boat. The character as written in the 1929 film was much closer to Ferber’s original than to the depiction of him in the classic Kern and Hammerstein musical play based on the novel as well as the 1936 and 1951 film versions of the musical.

Schildkraut received an Academy Award for Best Supporting Actor for his role as Alfred Dreyfus in The Life of Emile Zola. He gained further fame for playing the ambitious duc d’Orléans in the historical epic Marie Antoinette, opposite Norma Shearer, Tyrone Power, John Barrymore and Robert Morley, and gave a notable performance as the villainous Nicolas Fouquet in The Man in the Iron Mask .