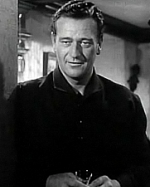 Marion Mitchell Morrison, born Marion Robert Morrison and better known by his stage name John Wayne, was an Academy Award-winning American film actor, director and producer. He epitomized rugged masculinity and has become an enduring American icon. He is famous for his distinctive voice, walk and height. He was also known for his conservative political views and his support, beginning in the 1950s, for anti-communist positions.

A Harris Poll released January 2009 placed Wayne third among America’s favorite film stars, the only deceased star on the list and the only one who has appeared on the poll every year since it first began in 1994.

In 1999, the American Film Institute named Wayne 13th among the Greatest Male Stars of All Time.

Wayne was born Marion Robert Morrison in Winterset, Iowa. His middle name was soon changed from Robert to Mitchell when his parents decided to name their next son Robert.