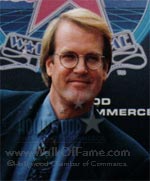 John Frank Tesh is an American pianist and composer of pop and contemporary Christian music, as well as a radio host and television presenter. Besides playing keyboards, he plays the trumpet and sings, and has sold over 7 million records. His John Tesh Radio Show is syndicated on 400 stations and he is also known as the longtime host of the television program Entertainment Tonight. He has previously worked as a sportscaster for the Olympic Games, news anchor and reporter. Tesh has won 6 music Emmys, has 4 gold albums, 2 Grammy nominations and an Associated Press award for investigative journalism. His live concerts have raised more than $20 million for PBS. In 1995 Tesh sold 50% of his record company, GTS, to Polygram for $8 million. Tesh then created Garden City Records which he still owns today.

Tesh was born in Garden City, New York, on Long Island, and graduated from Garden City High School in 1970. Playing piano and trumpet from the age of 6, he studied with teachers from The Juilliard School and was named to the New York State Symphonic Orchestra in high school, while also playing the organ in a rock band. Tesh studied communications and music at North Carolina State University graduating in 1975. While at NC State, he was initiated into Lambda Chi Alpha fraternity. While in the area, Tesh worked as a news anchor at WTVD in Durham, North Carolina. After graduation, Tesh went to Orlando, Florida, to take a television position at WFTV.

Tesh has been married to actress Connie Sellecca since 1992. They have one daughter together named Prima.

His television career included a stint as a news anchor and reporter at WSM-TV in Nashville, Tennessee, in the 1970s, where he often covered the same stories as Oprah Winfrey who worked at a competing Nashville station. He shuffled from Nashville to Raleigh, to Orlando, and finally to New York’s WCBS-TV where, at age 23, he was their youngest reporter. He later hosted the television show Entertainment Tonight from 1986 to 1996.