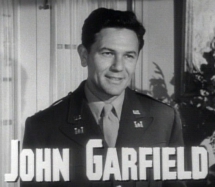 John Garfield was an American actor. Garfield was especially adept at playing brooding, rebellious, working-class character roles. Garfield is acknowledged as the predecessor of such Method actors as Marlon Brando, James Dean, and Montgomery Clift.

Born Jacob Julius Garfinkle in New York City, the son of Russian Jewish immigrants David and Hannah Garfinkle, Garfield spent the first seven years of his life in Sea Gate, Brooklyn. After the death of his mother, Garfield was sent to a school for difficult children in the Bronx. It was under the guidance of the school’s principal?the noted educator Angelo Patri?that he was introduced to both boxing and acting. He had also contracted a childhood illness, severely damaging his heart and limiting his ability to engage in strenuous athletics. He received a scholarship to Maria Ouspenskaya’s acting school, making his Broadway debut in 1932.

He became a member of the Group Theater. The Group’s play Golden Boy was written for him by Clifford Odets, but ultimately he was cast in a supporting role rather than the lead. Garfield decided to leave Broadway and try his luck in Hollywood. In 1938, he received wide critical acclaim and a nomination for the Academy Award for Best Supporting Actor for his role in Four Daughters.

Garfield did summer stock at the Pine Brook Country Club located in the countryside of Nichols, Connecticut, which became the rehearsal headquarters of the Group Theatre formed by Harold Clurman, Cheryl Crawford and Lee Strasberg during the 1930s and early 1940s.