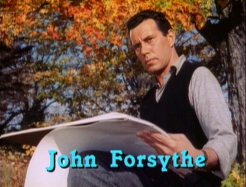 John Forsythe was an American stage, television and film actor. Forsythe starred in three television series, spanning four decades and three genres: as single playboy father Bentley Gregg in the 1950s sitcom Bachelor Father ; as the unseen millionaire Charles Townsend on the 1970s crime drama Charlie’s Angels, and as patriarch Blake Carrington on the 1980s soap opera Dynasty. He hosted World of Survival. The eldest of three children, Forsythe was born as Jacob Lincoln Freund in Penns Grove, New Jersey, to Blanche Materson and Samuel Jeremiah Freund, a stockbroker. He was raised in Brooklyn, New York, where his father worked as a Wall Street businessman during the Great Depression of the 1930s.

He graduated from Abraham Lincoln High School in Brooklyn at the age of 16, and began attending the University of North Carolina at Chapel Hill. In 1936 at the age of eighteen, he took a job as the public address announcer for Brooklyn Dodgers games at Ebbets Field, confirming a childhood love of baseball.

Despite showing initial reluctance, Forsythe began an acting career at the suggestion of his father. He met actress Parker McCormick and the couple married in 1939; they had a son, Dall, and divorced in 1943. As a bit player for Warner Brothers, Forsythe successfully appeared in several small parts. As a result he was given a small role in Destination Tokyo. Leaving his movie career for service in World War II, he appeared in the U.S. Army Air Forces play and film Winged Victory, then worked with injured soldiers who had developed speech problems.