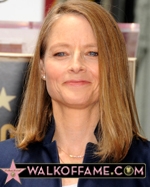 The Hollywood Chamber of Commerce proudly honoredactress/director Jodie Foster with the 2,580th star on the Hollywood Walk of Fame on today, Wednesday, May 4, 2016 at 12:00 p.m. PDT. The star in the category of Motion Pictures was dedicated at 6927 Hollywood Boulevard in front of the TCL Chinese Theatre.

“We have been waiting for a long time for Jodie Foster to set a date for her star and are thrilled that the time has come. She is a great role model for women and we are proud to add her star on the Hollywood Walk of Fame,” stated Walk of Fame producer Ana Martinez.

Born and raised in Los Angeles, Foster began her career at age of three, appearing as “The Coppertone Girl” in the television commercial. She then went on to become a regular on a number of television series, including “Mayberry RFD,” “The Courtship of Eddie’s Father,” “My Three Sons” and “Paper Moon.” She made her feature debut in Napoleon and Samantha when she was eight years old.

But it was her role in Alice Doesn’t Live Here Anymore (1975), which brought her to the audience’s attention, and her powerful portrayal of a streetwise teenager in Martin Scorsese’s Taxi Driver (1976) that won her widespread critical praise and international attention. Foster appeared in a total of four films in 1976, Bugsy Malone,Echoes of Summer,Little Girl Who Lives Down the Lane andTaxi Driver, which were all presented at the Cannes Film Festival. Alan Parker’s Bugsy Malone, earned her an Italian Comedy Award.

Jodie Foster’s stunning performances as a rape survivor in The Accused and as Special Agent Clarice Starling in the hit thriller The Silence of the Lambs earned her two Academy Awards® for Best Actress and a reputation as one of the most critically-acclaimed actresses of her generation.

For her role in The Silence of the Lambs, Foster was also awarded a Golden Globe® Award, a British Academy Award, a New York Film Critics Award and a Chicago Film Critics Award. Foster received her first Oscar® nomination and awards from the National Society of Film Critics and the Los Angeles Film Critics for her role in Taxi Driver. She also became the only American actress to win two separate awards in the same year from the British Academy of Film and Television Arts – Best Supporting Actress and Best Newcomer honoring her performances in both Taxi Driver and Bugsy Malone.

In total, Foster has appeared in more than 40 films, including recent films Elysium opposite Matt Damon for director Neil Blomkamp; Carnage for which she received a Golden Globe Award nomination; Nim’s Island with Gerard Butler; The Brave One for director Neil Jordan for which she received a Golden Globe Award nomination; Inside Man with Denzel Washington and Clive Owen; the box-office hit Flightplan; Jean Pierre Jeunet’s French language film, A Very Long Engagement; David Fincher’s box-office success, Panic Room; Anna and the King for director Andy Tenant, Contact for director Robert Zemeckis; Nell opposite Liam Neeson; the comedy Maverick opposite Mel Gibson and James Garner, and the romantic drama Sommersby opposite Richard Gere.

In 2013 she was presented with the Cecil B. DeMille Award from the Hollywood Foreign Press Association for Lifetime Achievement.

Foster’s most recent film which she directed is the thriller Money Monster starring George Clooney, Julia Robertsand Jack O’Connell. The film will be released by Tristar on May 13th.

Foster’s other notable motion picture credits include Woody Allen’s stylized black and white comedy Shadows and Fog; Siesta; Stealing Home; Five Corners; as well as earlier films Tom Sawyer; Freaky Friday; Adrian Lyne’s Foxes; Tony Richardson’s The Hotel New Hampshire and Claude Chabrol’s The Blood of Others, for which the multi-lingual Foster looped all of her own dialogue in French.

In addition to her acting, Foster has always had a keen interest in the art of filmmaking. Foster made her motion picture directorial debut in 1991 with the highly acclaimed Little Man Tate, in which she also starred. In 1995, Foster directed and produced her second film, Home for the Holidays, starring Holly Hunter, Anne Bancroft and Robert Downey Jr. In 2011 she directed The Beaver, which starred Mel Gibson, Jennifer Lawrence and Anton Yelchin and Foster. 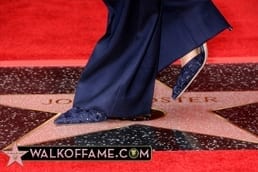